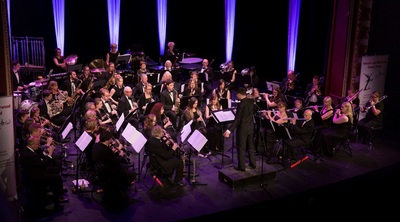 NSCB is a welcoming, friendly group with a high standard of musicianship. We regularly have over 50 members rehearsing and performing.

NSCB performs concerts throughout the year in Nottinghamshire and surrounding counties. In 2017, it entered the National Concert Band Festival for the first time and achieved a Gold Award. This was improved in 2018 to a Platinum Award which led to being invited to perform at the NCBF National Finals in Manchester in April 2019 when a further Gold Award was received.

NSCB travelled to the Black Forest in Southern Germany in summer 2019 visiting Newark's twin town of Emmendingen. This was the band's first overseas tour and we hope to return on a regular basis.

In April 2019 NSCB launched Newark and Sherwood Development Band which is a new band for brass, woodwind and percussion players of any standard who are returning to playing or just learning and want to improve. It has been a tremendous success and already has 25 regular members.

In June 2019 we held our first Young Soloist of the Year competition for local youngsters which was entered by 25 young people from Newark and the surrounding area; this will be a regular event.