In a new blog for Adopt a Music Creator 2020/21, Hepton Singers MD Richard Bunzl recounts an inspiring visit from Fergus Hall as their collaboration gathers momentum.

Many of us will have recently experienced what it feels like to first meet and get to know someone via a computer screen – only to be followed, months or even a year or more later, by finally encountering that person ‘in real life’. Such was the case with Hepton Singers’ adoptive music creator, Glasgow-based composer Fergus Hall, when he was eventually able to visit the choir’s hometown of Hebden Bridge, West Yorkshire in October 2021.

'The end result, after several months of going from one choir member to the next, was an eclectic mix of artistic impressions of the whole area where the choir lives.'

The choir had already ‘met’ Fergus through a series of online workshops, the most recent of which had included a whistle-stop tour of the history of graphic notation in music, and concluded with an invitation to individual choir members to develop this further. Building on a previous workshop (after which the choir was encouraged to make sound recordings from favourite localities or of activities that were special or meaningful to them), this next task saw members of the choir visually recording their impressions of local places that held a personal significance.

But this happened in a very particular way. Fergus had prepared a parcel that included a diverse range of writing and drawing materials, alongside a supply of paper. This parcel was to undertake a journey from one participating choir member to the next, each logging their contribution. But the nature of that contribution, and the locality from which it drew inspiration, was highly individual. The end result, after several months of going from one choir member to the next, was an eclectic mix of artistic impressions of the whole area where the choir lives.

A sense of place is clearly important to Fergus, and this made it all the more important for him to come and visit, placing his boots on the ground of the Upper Calder Valley. It was wonderful to finally meet him, to show him some hospitality, and for him to attend a full choir rehearsal in person. Once the choir was warmed up, Fergus took the reins and led us through a series of exploratory sketches.

'...described so evocatively in the Ted Hughes poem of the same name as a ‘black village of gravestones’ and which, on the day Fergus visited, lived up to the very last lines of the poem as a place where ‘only the rain never tires’'

We immersed ourselves in rich modal harmonies, improvised around flowing, undulating scale patterns, and savoured his peculiarly apt choice of words – words of place and landscape whose roots were either in Scotland or Yorkshire – that may form the text for the new work.

While primarily a chance to hear and meet the choir, Fergus’ visit was also an opportunity to harvest – in person – the idiosyncratic contents of the roving parcel, and to visit some of the very special places in and about Hebden Bridge he had already heard so much about. This included a walk around the historic village of Heptonstall (where Hepton Singers first started in the 1970s), described so evocatively in the Ted Hughes poem of the same name as a ‘black village of gravestones’ and which, on the day Fergus visited, lived up to the very last lines of the poem as a place where ‘only the rain never tires’.

But the sun shone brightly on Fergus’ last morning as a few members of the choir led him on a set-piece walk to the stunningly beautiful Hardcastle Crags, just outside Hebden Bridge. He left us with a strong sense of place, with West Yorkshire mud on his boots, and filled with ideas on how to bring his new piece closer to completion. 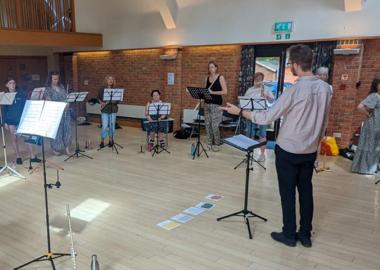 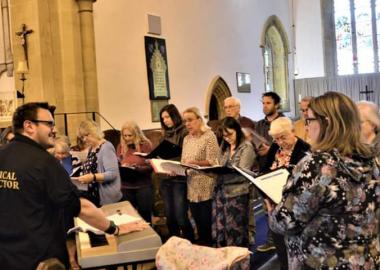 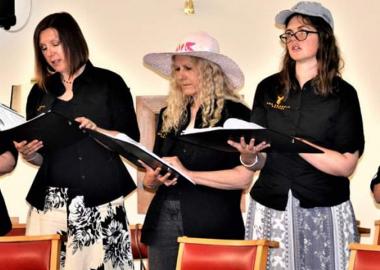 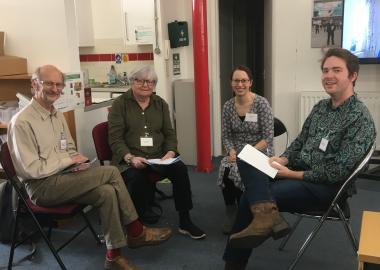