Jo Churchill OBE was on the Executive (equivalent of today's Board of Directors) and subsequently became Chairman of the National Federation of Music Societies, as Making Music was known then, in the 80s and early 90s, at a time when NFMS had just one or two employees and many hands-on volunteers, of which she was one.

Meeting her recently, still an active singer and a volunteer (albeit not for NFMS), we were both struck by the fact that whilst many things have changed, the underlying issues facing amateur music groups, and Making Music, remain largely the same.

Our meeting came about after I told members last year about Arts Council England ceasing to fund us as a National Portfolio Organisation. Jo emailed me encouragingly in response, to let me know that NFMS had been there before and had emerged triumphant from such a crisis, and surely would again. As on the occasion of the events she had been party to, the Board in 2014 again considered the most fundamental question of all: is Making Music needed? Would it be missed if it closed down?

Just as in the 80s, the answer last year came back with a resounding 'yes': there is no other organisation like Making Music. If it folded today, someone would re-invent it tomorrow.

But there are differences, Jo and I discovered, to the way Making Music positions itself now and two decades ago. NFMS was set up originally by professional musicians – composer and conductor Sir George Dyson and Incorporated Society of Musicians President Frederick Woodhouse – in the wake of the depression for the benefit of professional musicians: amateur music societies which gave so much employment to professionals were struggling and needed support, so that these engagements would be preserved.

Today I still make the case – continually – to the professional music sector that amateur music groups are the largest contractors of professional musicians: our members alone employ 34,000 professionals a year, spending £18.7 million on them annually, and £1.7 million with music publishers. Without the vast amateur sector regularly offering work to players, singers, conductors, accompanists, composers, and music teachers, most professionals would not earn a living. That is worth repeating again and again to the organisations representing professionals that we work with on members’ behalf.

Making Music of course still offers opportunities to professional musicians, particularly early in their career: Adopt a Composer benefits up and coming composers as much as it benefits members; and the Philip and Dorothy Green Award for Young Concert Artists is there to help young professionals start building a career as well as enable amateur groups to present and perform alongside the musical stars of tomorrow, at a rate they can afford.

However, I do think as an organisation our focus has shifted. Our vision now is not about, or aimed at, professional musicians, it is of:

...communities enriched by flourishing amateur and community music groups offering opportunities for participation and engagement in music to all in their locality, transforming individual and community wellbeing

and Making Music sees it as its mission ‘to support, develop, connect and champion its members and everyone who makes, performs and presents music on a voluntary basis.’

Where the original founders saw the amateur music world in a supporting role to the professionals, nowadays Making Music thinks that supporting cast is the star of the show: the focus is on what music can do for those that aren't professional musicians, for everybody, and for their communities.

There are other changes compared to the world of the 1980s, technology being the obvious one. Members now, as expressed in surveys, clamour for services to be delivered online where they can access them from wherever they're based, 24/7; only a minority now wish for personal visits from Making Music volunteers, standard in Jo's day.

But there are also many issues that have not changed: how do we ask our founding Music Director to step aside? This question we still get asked on a regular basis made Jo laugh in recognition. Why is nobody stepping forward to join the committee? How do we reach new audiences and new members? Can you help us with fundraising?

There are those that think it tiresome to listen to ‘oldies’ (forgive me, Jo!) talking about how things were done in their day; but I've always been a fan of history, not because I long for some past, supposedly golden, age, but because we can learn from it: it can help us avoid mistakes and understand what we can do for members and amateur music now by reminding us of what was successful before.

So this blog is by way of a thank you to Jo, and the other members who tell us now and then what good or bad things Making Music might have done in the past: we listen gratefully to what you tell us, though we might take lessons from it that you wouldn't necessarily anticipate, and may take matters forward in previously un-thought of ways. Making Music, like its members, constantly needs to evolve and adapt to its time, but without forgetting what it is built on and what its strengths are.

This, dear members, we are determined to do, so that Making Music can ensure you are still strong and flourishing, and bringing joy to individuals and communities, in 20 or 50 years' time. 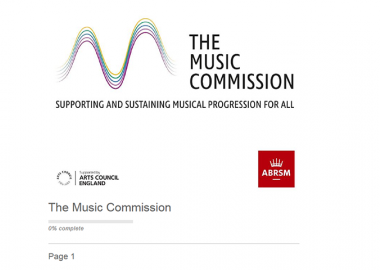 Making Music
News
Your views are important
There is a lot of debate about music education and arts funding at the moment. But these debates do not take note often enough of issues that affect...