Making Music is sad to hear of the passing of Alex Murchie (1946-2021) who was a true friend to the organisation and an ever supportive volunteer, North Committee and Board member over the decades, as well as a very fine singer. Eric Cross of Newcastle Bach Choir, and Robin Osterley, former Chief Executive of Making Music, pay tribute below.

"Lindsay and I have been lucky enough to know Alex for over four decades. When we first arrived in Newcastle in 1978 she was already well established in the Bach Choir, and it soon became clear that she was one of its driving forces. The connections with her day job as a researcher and producer for Tyne Tees enabled us to record a series of epilogues shortly after we joined, and of course her tireless work on publicity and PR, both for the Bach Choir and later for Cappella too over decades, raised the profile of both groups. It says much about her contribution that, when she eventually stepped down from that role, the Bach Choir replaced her with a publicity sub-group rather than a single individual!

Alex always held clear views and showed great determination. It was moving - and absolutely in character - to see her taking part in a couple of our Monday evening zoom rehearsals from her hospital bed, and she contributed individual recordings for all our online concerts over the last year despite her illness. She could be quite forceful – she didn’t suffer fools gladly – and we’ve all had that look from time to time that suggests that we don’t have a brain!

This determination, often coupled with great enthusiasm, was obvious in all her musical activities, whether it was pursuing a potential sponsor or newspaper columnist about an upcoming concert, or lobbying a conductor or committee about a work she thought would be suitable.

This determination, often coupled with great enthusiasm, was obvious in all her musical activities, whether it was pursuing a potential sponsor or newspaper columnist about an upcoming concert, or lobbying a conductor or committee about a work she thought would be suitable. (I was a deep disappointment to her for failing to programme Finzi’s In terra pax in any of our Christmas concerts!) It was also apparent in some of her more complex travel arrangements, when she would arrive for a concert at the last minute from some European summer school or workshop. And it was at the heart of the long battle with her illness, where she showed such extraordinary determination in spades.

As a singer Alex's contribution to the Bach Choir, Cappella, Camerata, Exultemus and all the other groups in the region with which she sang, was enormous. I can probably appreciate that better than anyone else, having conducted her in both Bach and Cappella for over 30 years each, as well as in various other groups (I still have a vivid memory of her singing in the then annual MayDay madrigals in the University quad with snow gently falling on the grass). And, of course, you could never fail to notice Alex. All our concert managers were used to the challenge of where she could stand without preventing swathes of the choir from seeing the conductor!

Her ability to maintain a line, whatever might be happening around her, saved more than one concert

Alex was a key member of any choir she sang in. Not only was she a highly skilled sight-reader, she was a genuine musician who understood how to approach all the different styles of music involved. Her knowledge of the choral repertoire, and indeed so much other music too, was second to none, and she often came up with suggestions for new repertoire that proved highly suitable. Her ability to maintain a line, whatever might be happening around her, saved more than one concert, and she also contributed solos. The clarity of her top notes in particular means that there are various works that we will always associate with her. She would go for them 100%, even if she ended up being the only soprano to do so, and I always felt that Verdi wrote that optional long top C in the Requiem with her in mind!

Of course music was only a part of Alex’s life. She was a consummate gardener with a huge knowledge of and interest in plants of all descriptions. This was apparent not only in the tiny but perfectly formed garden at Hedley Street, but in countless gardens across the country that owe so much to the time that was freely and uncomplainingly given. It was unusual to come away from a garden visit without a cutting or a book borrowed. We have a plant in our back garden known as The Thug Plant – we never picked up what its real name was – and of course she was quite right about its ability to take over a whole flower bed when you are not looking. And even during lockdown, and between treatments, she was still struggling to get across to the Lakes, where she was helping develop her cousin’s garden, probably knowing that she would not be there to see the fruits of her labours – a typical example of her great personal loyalty.

And then there was her flying. I cannot speak of that myself at first hand, but again friends have been recalling their experiences, when, with typical generosity, Alex took them up as passengers. Judy reminded me last week of a flight many years ago over the Farnes and Holy Island. Trying to overcome her claustrophobia in the small 4-seater aircraft, Judy was concentrating on the wonderful views and inadvertently said, 'the sea looks so inviting', for which she was severely reprimanded: 'don't say that, it's not where we're bloody going!'

I knew that she was a long-serving board member for Making Music, the national membership organisation for amateur music-makers, but I didn’t know that she received their prestigious President’s Award jointly in 2013 – she never told any of us...!

There are several things I have learnt about Alex from her friends over the last fortnight. She saw every production she could of Michael Frayn’s Noises Off; David saw it with her at the Customs House in South Shields and at the Theatre Royal shortly after her first treatment for leukaemia. She wasn't really allowed out but they took a box and sort of smuggled her in. I knew that she was a long-serving board member for Making Music, the national membership organisation for amateur music-makers, but I didn’t know that she received their prestigious President’s Award jointly in 2013 – she never told any of us, even Penny!

Alex’s death is a huge loss to the whole region. She will be sorely missed by all of us who knew her, and we are thankful for her friendship and for the joy of singing with her for so long."

"I was very sorry to hear of the passing of Alex Murchie, who was on the board of directors when I joined what was then NFMS in 1997, and with whom I worked until she came to the end of her term in 2004. She was tireless in her support of both the board and what was then the North Committee. She was deeply committed to our work and played a vital part in several important decisions, including the change of name to Making Music. She was wise, constructive, supportive and full of ideas and creativity, as well as being a great musician, gardener and private pilot. She brought something very special to us and she will be much missed." 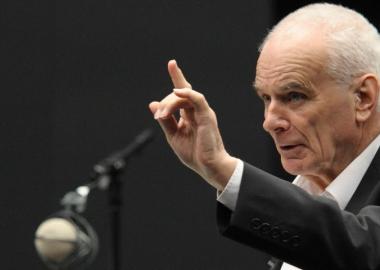 Making Music
News
A tribute to Sir Peter Maxwell Davies, the...
Whatever reputation he may have had as an enfant terrible – cheerfully watching Prommers storm out of his performances in the 1960s –...