Being active on social media can be a great way for your group to grow your audiences, build relationships, recruit new members and learn from other groups, but it takes effort to make the most of it.

In our getting started guide we covered the basics of setting up accounts and creating your first posts. In this resource we cover our top tips for building an engaged audience and spreading your messages as far as possible.

In this guide, we've brought together some top tips for creating and engaging social media presence for your group. Because most groups will use Twitter or Facebook, the examples we give for each of the tips mainly focus on these two channels. However, the principles apply just as much to any of the many other social media channels available.

Be realistic about your aims

Social media channels can be powerful tools for creating and building relationships, particularly for new or hard-to-reach audiences (e.g. young people). But if you're looking for nothing more than a quick increase in ticket sales, other avenues (e.g. poster advertising) may be more efficient. The benefits of social media come from its usefulness in building relationships (the 'social' bit is key) with your audiences, whether they be potential concert-goers, members or advocates for your group. That will often have a knock-on effect on ticket sales, but relationships need to come first. This leads on to our second tip...

Find someone (or several someones!) who enjoys it

You don't necessarily have to invest much time at all on your social media presence (though in general, the more you put in, the greater the impact you will see). However much time you spend, the single biggest head-start you can give yourself is in ensuring that the people running your account are enthusiasts - for music, for your group, but also for the social media channels you're using.

A creative person (whether they are in your group or not) who enjoys spending time browsing/talking/consuming social media will usually also be a person who instinctively understands what will work and what won't. That doesn't mean you have to put a social media expert in charge – often a complete 'newbie' will become the most enthusiastic convert – just that whomever it is should look forward to running the account, rather than accepting their fate with a groan!

You also don't have to stick to just one person doing all the work - it's often more sensible to share the work of posting and responding across several different people. Similarly, if several people in your group are on the lookout for interesting things to photograph/video or interesting news to share, it will be a lot easier to come up with engaging posts on a regular basis.

2. Build up your followers

Make the most of your profile

The elements that make up your profile on social media are often the first (and sometimes the only) clue potential followers have as to who you are, what you stand for and what they'll get from engaging with you. For that reason, it's worth making sure you have a clear, clean and engaging profile ready before you start posting.

It usually takes a while to build up a base of followers, but you can often kick-start the process. The likelihood is that many of your members and supporters will already be on a social media channel, so when you're starting out don't forget to make use of these supporters by asking them to follow you and to share your posts. On top of these existing supporters, following other like-minded or related accounts makes you visible to them and will often result in them following you back. 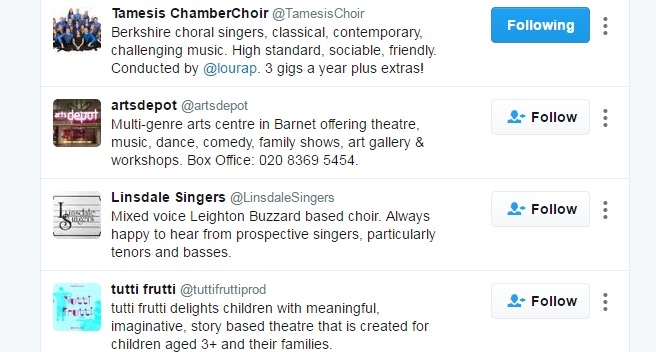 Users will often check out your profile before making the decision to follow you – make sure that you don't appear inactive by posting regularly.

3. Re-post to boost your chances

Due to the volume of posts on an average users’ screen, many of your followers won’t see all of your posts.

Because of that, it's not only acceptable, but advisable to post the same content more than once (though not in exactly the same form): we often find around 75% additional interactions with items that we re-post. To ensure it's not exactly the same, try changing:

When you start posting, it's important to remember that social media should be sociable.

Would you walk into a party and immediately start shouting that you have a concert next week? Probably not! Likewise, your social media activity shouldn't just focus on your group.

Instead, aim to provide an engaging and entertaining presence - that way followers will come back and keep paying attention to what you say - something that will pay off when you do have a concert to tell them about.

E.g. Here the London Mandolin Ensemble have posted about an exhibition that's likely to be of interest to their followers:

One way to keep an eye on this is to aim for a ratio of posts like the 'golden ratio':

Another way to think of it is as a rule of thirds.

5. Make the most of images and videos

A post with an image on Twitter gets more than 2 x as many ReTweets, favourites etc. as one with just text, and the same applies to other social networks like Facebook, Google+ and LinkedIn. Make the most of the space you have by ensuring that you use pictures or videos where possible.

If you're not sure how you're going to come up with that many bits of content, don't worry: you'd be surprised how easy it is with a little imagination. Here are some examples of things you could try.

It's a fair assumption that much of your audience (both followers and concert-goers) share a love of music. This can be a great place to start when looking for content that is likely to engage potential audiences.

At Making Music, some of our most shared posts are nothing more than neatly-laid out quotes on the power of music like the one below. The fact that they are about love of music, rather than Making Music means that they spread much further than many more specific/tailored posts, and so introduce us to a wider audience than would otherwise be watching.

In the following post (from the London Symphony Orchestra), they've used nothing more than a picture of a record and a fun and informal tone of voice to highlight an upcoming concert without it feeling like an advertisement.

Why, who's that? It's only the LSO Percussion Ensemble performing @SteveReich on wax. Say hello to them this Record Store Day! #RSD17 pic.twitter.com/eJrPuH4Iqk

In this post, from member group Londinium, a short clip from a rehearsal provides the centerpiece for an excellent piece of 'teaser' content for a forthcoming concert. This provides both an engaging post in its own right (i.e. something nice for followers) and a neat bit of 'proof' to show potential concert-goers why they might enjoy attending.

And finally, don't stop at the concert

It might seem a bit late in the day to be posting, but photos, videos or reviews gathered from a previous (or in-progress) performance can provide excellent content - both celebrating what your group has achieved and showing followers what they may have missed (*nudge - book now for our next concert*). This post, from member group Aldworth Philharmonic, is a nice example of both.

A truly memorable evening. #APOauferstehung met with cheers and a standing ovation from a packed audience. Spectacular! pic.twitter.com/4monvJNHVH

Need a bit more help? Our beginner's guide has step-by-step instructions for setting up a profile and posting on each of the main social media platforms.

Recording audio at home
Planning for the future: finance
Making the most of online rehearsals
COVID-19: staying connected
COVID-19: keeping your group running 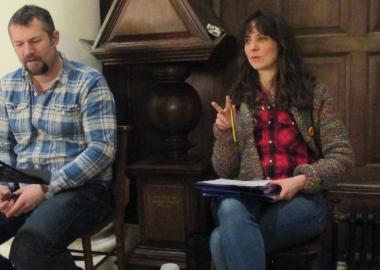 Making Music
News
Ancient & Modern: Evensong and the benefits...
Jess Griffin, of the Chandos Chamber Choir, on finding inspiration in poetry for their Adopt a Composer project with Laura Snowden.Since Chandos...