Adopt a Composer: the first spacewalk

Composer Rob Jones and members of The Edge Chamber Choir reflect on their first spacewalk-themed workshop of Adopt a Composer 2019/20.

I have been lucky to meet with The Edge Chamber Choir three times since I was named their 'adopted composer' in September. The first time I simply wanted to sit in a rehearsal, so that I could get to know the members and how they sound. I also attended their autumn concert in the fabulous church in the centre of Ludlow, which was great to see as this is where my own piece will be performed in June next year – how exciting!

Yesterday was the first big step towards the piece – my first workshop with the choir. I recently decided I would make my piece about spacewalks, partly because I was inspired by the news that the first all-female spacewalk took place in October, and also because I have had a recurring dream about spacewalking myself. In this dream, I tend to start outside the ship but then become unattached and get flung off into space, spinning round and round as I circle the earth in a terrifying manner. I had written a very short excerpt of music that explored some spacewalk themes to try in the workshop, but I really wanted some help from the choir members to flesh out the topic and help me write the text.

I recently decided I would make my piece about spacewalks, partly because I was inspired by the news that the first all-female spacewalk took place in October.

After showing the choir a short video of historic spacewalks, I decided to run an exercise with them to get in the mindset of an astronaut. I asked each of the choir members to imagine that they had been called up for a spacewalk, and to write down ten words that would describe how they would feel about this, what they might see, what they might hear. I then asked members to get into groups and compile a master list of words, selecting the best or most emotive.

Whilst planning the next stage of the workshop, I was nervous about how the choir members would react. I asked the groups to present their ten words back to the rest of the choir in a creative way. They had complete freedom to write a poem, repeat the words, sing them, rap them, anything! Fortunately, the choir members approached the task with much enthusiasm and the four groups came up with some outstanding ideas.

I asked each of the choir members to imagine that they had been called up for a spacewalk, and to write down ten words that would describe how they would feel about this, what they might see, what they might hear.

The choir members helped me to see that there are some important themes to consider about spacewalks. Two groups came up with the word 'umbilical' to refer to the wire that attached the astronaut to the space station, but also to imply the sense of motherhood that comes from the earth. They also noted that 'umblical' is a great word to sing, so I am thinking of basing a whole section of the piece around this word.

The choir also showed me that words of opposites might be important, such as light and dark, nothing and everything. We mostly talked about our emotional response to the idea of being in space, and it seems everyone feels something strongly about this, from excitement to fear.

I have much to think about in the coming weeks, but I am sure that some of the words and themes suggested by the choir will appear in the piece. With the next workshop in December, I’m excited to see how I can put these ideas into practice.

What did the choir think?

"The committee and I were the only ones to have an inkling of Rob's plans and theme, so it was fascinating to watch the choir members' reactions to his ideas. A few seemed out of their comfort zone with some of the activities, but really warmed to Rob's enthusiasm. Others really loved all the different activities and found it a refreshing change from our normal rehearsals. We are all looking forward to what our next workshop brings, and so far no one has sent their apologies!" - Ros Crouch (Musical Director)

"I must admit I was a bit apprehensive about what the evening would hold, as we’d learnt we may be doing some space-themed tasks! But I have to say I really enjoyed the evening. It was a great fun being involved with a composition at such an early stage, seeing how a composer gets ideas and themes before turning them into something special." - Simon

"Working with Rob on the beginnings of his composition was a fascinating experience. Starting with a couple of pages of draft composition, we tried out tempo, dynamics, mood, and style – evolving a little piece of wonder! Then we explored the feelings and words around walking in space, which I loved! It was great fun not only creating small vignettes around the theme, but also beginning to understand each other’s creativity. Rob was so enthusiastic and encouraging and very quickly seemed to develop a relaxed relationship with the choir. I’m really excited to see where all this leads him." - Jane

"Rob was so natural and approachable that it made us feel relaxed and that we were all contributors in a joint project. A very enjoyable start to what promises to be a very interesting experience." - Hilary

"We had a great first workshop with Rob. He stretched us, listened to us, developed sounds with us, challenged us, encouraged us, and as a bonus, we laughed together a lot!” - Celia 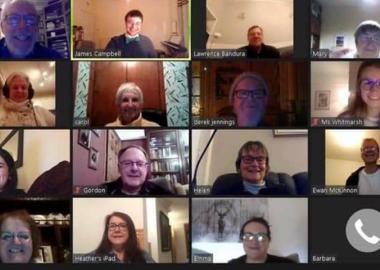 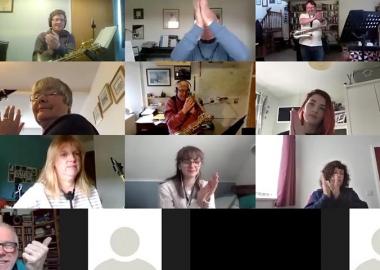