The flute, viola and harp trio can now be booked by Making Music members for a subsidised fee. They talk to Rey Trombetta about what promoters and audiences can expect from their performances

Music as the most intimate form of communication. That is what Pelléas Ensemble, the recent winners of the St Martin-in-the-Fields Chamber Music Competition, are about. It could be in front of an audience of a dozen or five hundred, but their goal seems to always be the same: For every spectator to feel that the flute, viola and harp are being played for them and no one else.

That is why they were thrilled to win not only the Grand Prize but also the Audience Prize at St Martin’s. ‘The judges would have been listening for high technical and musical ability’, acknowledges Oliver Wass (harp), but for the trio the real goal was communicating with every member in the audience. ‘We all enjoyed the fact that it felt more like a concert performance than a competition.’

It is no surprise, then, that the word ‘Intimate’ is the first one they mention when prompted to describe themselves. That, explains Luba Tunnicliffe (viola), is why they go through the trouble of memorising their entire repertoire. ‘We want no music stands in the way! We take communication with audiences very seriously.’

And that, also, is why it is so important for them to introduce every piece of music they play. ‘We want to create a friendly rapport with the listeners,’ says Henry Roberts (flute). ‘A small bit of information can completely change your perception of a piece. Say, if you're told that the composer is Icelandic you might imagine landscapes and scenery from that country, which is so different from here. It can have a great effect on the way you listen.’

The young musicians put together the ensemble in 2011, while studying at Guildhall School of Music and Drama. Since then, they’ve earned a great deal of recognition, including first prize at the British Harp Chamber Music Competition; being selected for the Tillett Trust Young Artists’ Programme; and reaching the finals of the Royal Overseas League Chamber Music Competition. On 21 November they will have their Wigmore Hall debut.

From Bach to Contemporary

The flute-viola-harp combination has been around for a century, after Claude Debussy composed his Sonata in 1915. Yet, it is still considered unusual and finding repertoire is a bit of a challenge. Pelléas performs many arrangements (from Baroque to Contemporary) and also commissions pieces, some with a very strong jazz influence that, they hope, will appeal to younger audiences. ‘We are also doing our own musical arrangements, for example, Prokofiev’s Suite from “Romeo and Juliet”. And there are vast numbers of Baroque trio sonatas, those written for traverso flute, viola da gamba and harpsichord, that work perfectly for us,’ says Luba.

Pelléas attracts promoters that want to go beyond the usual offering of string quartets. ‘Our instruments have very different natures, so it's possible to explore all sorts of sound worlds and textures,’ says Oliver. ‘The only disadvantage, really, is getting the harp around!’

As winners of the St Martin-in-the-Fields Chamber Music Competition, Pelléas Ensemble can be booked by Making Music members at a subsidised rate of £750 (for the first 12 engagements). Find out how to book the ensemble at a subsidised rate. You will find more information about their repertoire on page 13 of the most recent edition of our Selected Artists brochure.

Find out more about the St Martins competition, or find out how to book the Pelléas Ensemble at a subsidised rate. 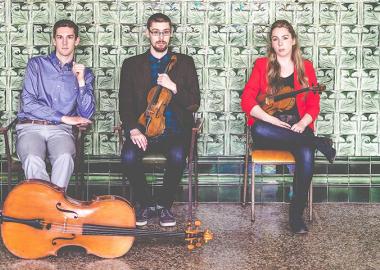 Making Music
News
A conversation with Zelkova Quartet, winners of...
Zelkova Quartet won the 2017 St Martin's Chamber Music Competition with a fantastic rendition of string quartets by Haydn and Debussy. They are...