An introduction to: Samba

After looking at Barbershop, Wind Bands and Brass Bands, we are now focusing on Samba. What makes this music from Brazil so exciting and popular? How do you successfully navigate amongst the dozens of music styles? And how do you get involved?

It is a music genre that developed in Brazil in the early 1900s amongst extremely poor workers that fled to Rio and Bahia. Except for some limited European and indigenous American ingrendients, Samba is mostly an evolution of the music of African slaves (especially Kongo, Ewe and Yoruba) that were forcibly taken to the Americas between the early 1500s and the late 1800s. It evolved from the Lundu dance, and it shares roots with the Batuque that developed in Cape Verde.

Though the first Samba recorded in 1916 had no percussion (the Samba-maxixe style had more influence from the Tango of Argentina than anything else), for many people it is now inconceivable that this music could be anything but an explosion of polyrhythmic drumming.

Where does the word Samba come from?

There are several theories, but the most widespread is explained by Barbara Browning: ‘The KiKongo word semba is translated in Portuguese as umbigada, meaning "a blow struck with the belly button." In the earliest documented forms of the dance in Brazil, this gesture was used by the dancer in the center of a circle of spectators to call the next dancer to take a turn. Edison Carneiro argues that it is this gesture which unifies almost all variations on the samba in Brazil. The same gesture was also recorded by the Portuguese among Angolans in Africa during the period of slavery.’

What makes Samba so exciting?

Very much like the Blues in America, Samba is a product of the sorrow of the slaves and their descendants. ‘Samba is the father of pleasure and the son of pain,’ composer Caetano Veloso once said, whilst the poet Vinicius de Moraes wrote: ‘To make a samba with beauty it takes a lot of sadness.’ But Samba uses music and passion to transform that sorrow into joy.

'Samba is a body unselfconsciously flowing in response to a syncopated beat, melding curious indolence and sexual charge, form and spontaneity,' - Rowan Ireland

There is some music theory that tries to explain the magic behind Samba. If that's your thing, have a look at this study about why highly syncopated music produces so much happiness and pushes even the most left-footed people into a frenzied dance. Read this explanation of how the different lengths of notes and the placement of accents empower the Samba groove, or this analysis of how Samba blurs the line between 2/4 and 6/8 meter.

But no amount of theory will be enough and, actually, it might get in the way. Instead, have a good listen to the video playlist below, that includes some classics, several compositions that made history, the latest winners of the competition at the Rio Carnival and a number of pieces that you might hear amongst UK-based samba groups.

What style of Samba is right for you?

No two specialists seem to agree about the number of subgenres or styles (for a quick demonstration of some, look at this video). We’ll stick to mentioning the most popular, and the ones that had a greater influence on the Samba that is currently played in the UK.

Samba-enredo is what the ‘Samba schools’ perform at the Carnival in Rio. ‘Enredo’ is Portuguese for ‘plot’, as this style is all about singing stories. A good example is ‘Sonhar não custa nada! Ou quase nada’ (To dream costs nothing, or almost nothing).

Samba-choro is a mix of Samba and Choro, the urban music (vocal and instrumental) of Brazil in the late 1800s. It has less of a Carnival feel but still lots of joy. Chico Buarque’s ‘Meu caro amigo’ (My dear friend) is a typical piece.

Samba-exaltação is by far the most relaxed type of Samba, as you can hear in the song ‘Aquarela do Brasil’ (featured in Terry Gilliam's 1985 film Brazil), in Tom Jobim's Bossa nova version or the original by Francisco Alves.

Partido Alto is the Samba with the most pronounced African influence, with improvisation and call and response. This is the music of Jovelina Perola Negra and Bezerra da Silva, amongst others.

Samba Reggae is not in the mainstream of Samba in Brazil. It is the response of the black communities in Bahia that felt excluded from the movement in Rio. A lot of the Samba played in the UK is in this style, as Samba Reggae led to the creation of the Batala movement which is quite popular in Britain. Listen to the music of Ilê Aiyê, Olodum and Timbalada.

Samba has expanded to other styles and genres, including Samba-funk, Bossa-nova, Axe and the less-respected but commercially succesful Pagode.

How do you get involved?

To find a performance near you, check our events calendar. And to find a Samba group to have a go, try our Find a group tool. If you don't see any results near you, do an online search or contact your local music service, as they might be able to point you in the right direction.

Usually all groups take beginners and you do not need to bring a drum with you. If you don't fancy drumming, you could also try Samba dancing, and some groups also offer singing and even deliver occasional composition workshops.

For your first session you will need comfortable clothes, a positive attitude and a decent set of earplugs – you will need them when the 'bateria' (drum section) starts to play! 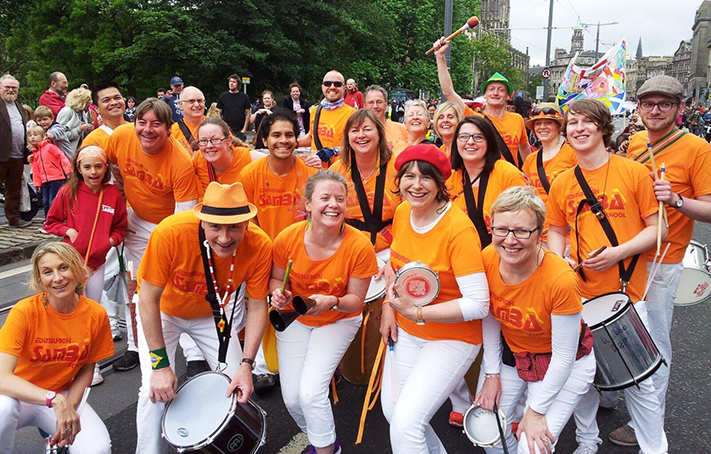