Following the busy weeks and months that led up to the premiere of my work Continuum by the Glasgow School of Art Choir, I can start to gather my thoughts and reflect on my time spent as their adopted composer – an experience that has been incredibly beneficial for me and, I hope, for them too.

One of the great things about this scheme is having the opportunity to really get to know the group that you’re working with over an extended period of time. For me this was invaluable, especially as I wanted to make a connection with the choir and really help them to understand my vision for the piece over the time we spent together.

The work I wrote for them, Continuum, is conceptual, derived from the a quote from the documentary film Grey Gardens:

I often incorporate non-musical elements in my work and this was no different. I included a walking/movement section at the beginning whilst the choir sing descending scales, and also a pre-recorded audio part which works alongside the sung vocal lines. I think a number of the singers were naturally a little tentative about this to begin with, as it’s not something they had ever encountered in previous choral works, but as I explained more about the piece and once they had spent a little more time with it in rehearsals, they embraced the idea and additional elements, and were happy to experiment with them further. 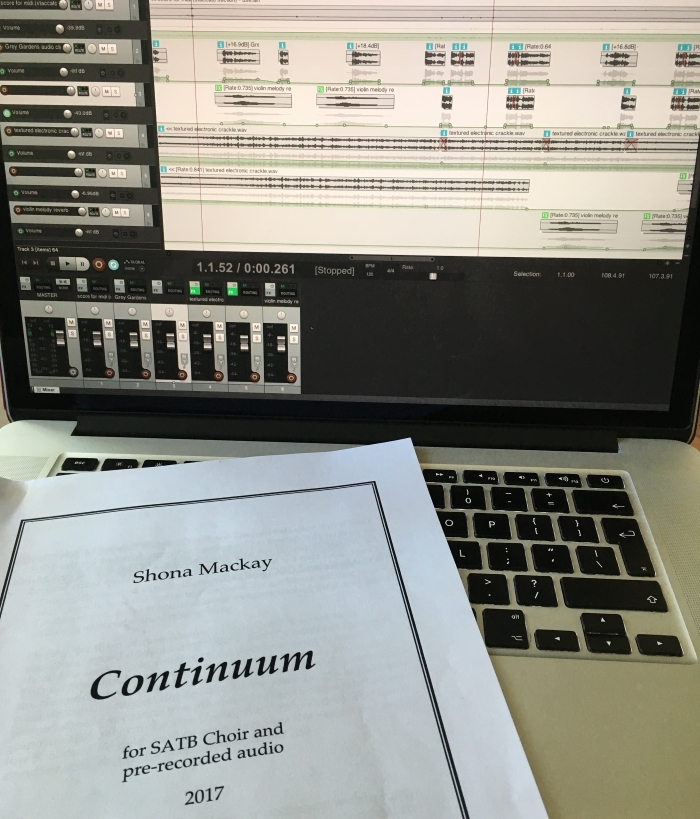 One of the best moments for me was when a few of the singers came up to me in a rehearsal a month or so before the performance and said 'We’ve finally got it, we understand it. It’s taken us a while but we get it now!' It felt so great, because you don’t always get that penny-dropping moment. When I heard that, and knew that they were so on board with it, I knew that all the hard work had paid off.

I wanted to write them something that was not only interesting, but challenging too. Back at the beginning of the scheme a few of the choir members had told me they wanted to try something new, something different, something a bit out of their comfort zone, and I think I managed to do that for them. The three sections of Continuum each provide something familiar but also something new at the same time, and I think they tackled it brilliantly, even if the shifting time signatures in the middle section proved a little frustrating for some. (Hopefully they’ve forgiven me for that now!).

The concert itself was a great experience and I still can’t believe the amazing venue that we had in the main foyer of Glasgow’s Kelvingrove Art Gallery and Museum. The opening walking/movement section sounded fantastic in the space and many people commented later on how atmospheric it was. There was a small hiccup during the opening of the middle section but the choir managed to get back on track quickly which I think is testament to their musicianship and ability to work together as a group.

I’m so grateful for their dedication and commitment to Continuum and the project and I’m so proud of how well they performed on the night. They are all fantastic and I hope that our paths will cross again in the future.