Imagine being 16 years old and conducting a choir of experienced singers in front of a full house. Last November, that daunting prospect faced Tasmin Sarkany, winner of the 2015 place in The Ripieno Choir’s Apprentice Conductor programme, as she prepared for her first public outing at the choir’s regular concert venue, All Saints, Esher.

Ripieno’s new Apprentice Conductor position (developed to mark the Choir’s 70th birthday) is offered to talented sixth form music students who are looking towards a career in music, and includes one-to-one coaching from the choir’s conductor, David Hansell, and the opportunity to rehearse the choir in short works and then perform them.

The search for suitable candidates involved contact with every school and youth choir in the area and Tasmin won the position against high calibre opposition, following a challenging interview testing musical skills as well as the potential to lead, coach and interact with people much older than herself.  She joined the choir as a singer for a term before taking up the baton, and has since conducted two performances of Monteverdi’s Christe Adoramus Te, one of which was for Hampton Court’s Sing500 festival, and is currently preparing the choir in two pieces for their 19th March recital of English Cathedral music. 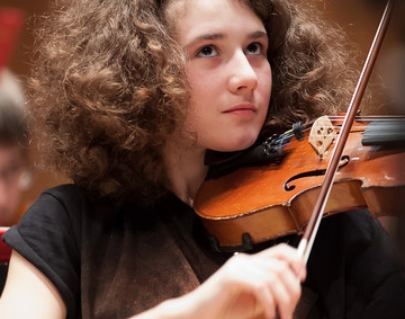 'In my youth, I had the opportunity of conducting tuition', said David, 'and it was an enormously formative experience. Very few conductors of choirs have had any formal tuition but I know what a difference it made to me and was delighted that Ripieno agreed to the scheme.'

Choir members were won over by the idea of supporting education in the local community and engaging with young musicians, and have been pleased with the outcome. 'It’s been a real pleasure to see how Tasmin has grown in technique and confidence over the period', said choir chairman Cameron Marshall, 'so we are keen to see this continue'.

As for Tasmin herself:

'I have immensely enjoyed being the choir's Apprentice Conductor. Although some moments have been challenging such as leading my first rehearsal or conducting in a concert for the first time, David and the choir have been supportive throughout. I have learnt many valuable skills from this experience which I can take away with me and would recommend this to anyone who enjoys music making.'

The Ripieno Choir is sufficiently encouraged by the outcome to want to continue the scheme and now has a clearer idea of the qualities that the Apprentice Conductor needs and what can realistically be expected of him/her.

And one unexpected bonus has been the even more dynamic conducting of the regular maestro! Breaking down his techniques in order to explain and teach them to Tasmin has been as good as a refresher course of tuition for him and as a result the Choir is singing better than ever.

Making Music
News
Touring, young people and Ohrworms
The logistical feat that is taking a musical group abroad and the challenges associated with an aging membership are two issues that we hear about...