First thoughts on Adopt a Composer

3am wake up, 6 hours of travelling and 2 coffees down before 10am, I arrived at Theatres Trust in London for the Adopt a Composer pairings day. After some initial housekeeping, we got straight down to announcing the pairings. I was quite nervous and excited to discover who I would be working with for the next year and delighted to find out that I have been adopted by the Ilkley based Two Rivers Concert Band.

Concert band is an instrumentation that I never written for before, and I have also never composed for such large forces (40-50!), so this in itself is going to be an exciting challenge for me.

My mentor is Emily Crossland, herself an established composer as well as lover and performer of Gamelan - I’m hoping to get involved in this at some point during the year too!

From our initial conversations and getting to know each other, I can see that Mike (MD) and Les (chair) from Two Rivers, and Emily are all open-minded, enthusiastic and very organised people with a lot of experiences to share; good ingredients from which to start a collaboration! They are also great listeners and make me feel at ease when I begin to make some initial suggestions about how I can imagine my first meeting with the band. We talk about using some improvisational games to generate some initial musical ideas and organise to meet each other at one of the first rehearsals back after the summer break in a few weeks time. At this meeting I am hoping to hear the band play some of their current repertoire so I can get an idea of their sound, get to know the band members a little bit and talk about the potential themes and inspirations for the piece.

I want the music to be as much theirs as it is mine, so this will be an important first step.

Les invites me to take a walk around Ilkley and the moors so I can get to know the town a little bit (reminder: buy some wellies), and we consider a 50th anniversary of the pairing of Ilkley and Coutances in Normandy next June as a potential opportunity for the first performance.

After having done some initial research, I have had some ideas for inspiration for the piece: connections with the Ilkley Literature Festival; the bronze age, Roman and spa town history; making some field recordings; the Wharfe and the Aire; performing in an unusual location such as the Roman fort or the brewery.

In the interview for Adopt a Composer, there was also mention of writing a piece for double bass and the group, this is something I think could be really interesting. I’m also starting to think about how I can use my experiences in jazz, improvised music, setting texts and composing for smaller groups in this context, breaking away from the traditional instrument orchestration and groupings and reinforce a sense of importance and individuality within the band, maybe seating instruments in a collection of small chamber groups.

Whatever happens in the end, right now I’m really looking forward to meeting everyone and getting started on the composition itself! 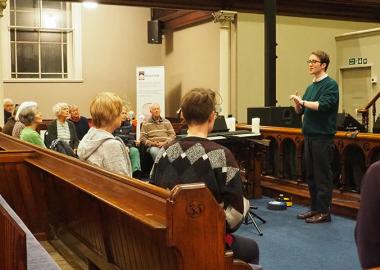 Making Music
News
Adopt a Music Creator blog: Back with a bang
Sheila Biegala fills us in on a long-awaited return to in-person activity for Ugie Voices, who can now look forward to more joint rehearsals with... 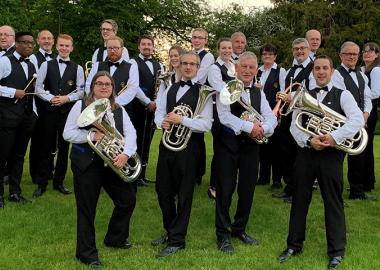