Diary of a composer

22 September 2018 During the launch for the Adopt a Composer scheme, I entered the room and ambled to an empty chair with a much-needed coffee and started to chat to the people next to me. Small world. The three of us were from South Wales. We had mutual friends (unfortunately justifying the stereotype that all the Welsh know one another). We have worked with many of the same musicians. The two people were Jemma Hughes and Jonathan Rogers, Music Secretary and Music Director of the Swansea Philharmonic Choir. And after the announcement was made, we were to work with one another over the coming year.

25 October 2018 First journey to Swansea. Not for my own music, but to rehearse alongside the choir. And what a choir they are! Warm welcomes. Hugs and smiles all-round.100 people packed into Gorse Mission Hall in Cwmbwrla, Swansea.

There’s nothing quite like the chatter and laughter of 100 people in one space, going over their week with their friends sitting next to them, pawing through scores, preparing their space. There’s something innately musical about that.

Conductor’s foot hits the podium and attention turns to the front. And what are we rehearsing? Benjamin Britten’s 'War Requiem'. Brought out the inner baritone for the evening next to the choir’s Chairman, Adrian Williams, and I was overwhelmed by their sound. Full-bodied. United.

22 November 2018 Around 8:45am and I was getting ready for work. Phone rings. Rhys Williams from BBC Wales. Asking whether I could share some words on my work with the Swansea Philharmonic Choir as part of Making Music UK’s Adopt a Composer project. Long story short, one of the most surreal days I have had. By 3pm, I found myself in the BBC Newsroom at Broadcasting House talking down a lens for BBC Wales, BBC Radio Wales and BBC Radio Cymru.

More information about the broadcast can be found here.

10 January 2019 To my amazement, delayed trains and a 5-hour trip did not mar my enthusiasm. I was ready. A catalogue of vocal exercises and an older piece of mine in hand, tonight I worked with the Swansea Philharmonic Choir.

Clapping, counting and canons. We worked together on clarity of sound, collective sound and allowing our own individual voices to be heard in this mass of sound.

Waves of solo lines. Chorales. Clouds of harmony. It was fun getting to know one another in such a creative setting. As I have been able to get to know some (not all yet as there’s so many of them) by singing with them, I thought bringing an older work of mine along would be a nice way of the choir to get to know me and my music. In just 35-minutes, the choir got to grips with my work te lucis ante terminum. Beautifully read and each singer threw themselves into this new world. Opening up conversations about the months ahead and what music we would like to make with each other.

Here’s to the next workshop. 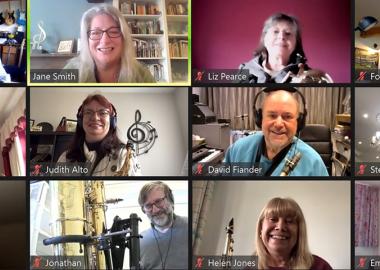